To date, New York City and the surrounding metropolitan area have seen the largest COVID-19 outbreak in the world. As of May 14, there have been more than 180,000 diagnosed cases in New York City alone. A recent publication reported that of the 32,107 deaths in New York City between March 11 and May 2,  24,172 were “excess deaths” or deaths caused either directly or indirectly by the COVID-19 epidemic. Approximately 80% of these excess deaths were classified as confirmed or probable COVID-19 deaths; the other 20% did not have a known link to COVID-19. To put this number into perspective, in 2017, the most recent year where data is available, there were 54,314 total deaths in NYC over the entire 12 months. Although this wave of the outbreak is not over, the death rate is declining substantially, with less than 100 deaths per day compared to around 800 at the peak in early April.

We wanted to understand what impact the excess death to date might have on one of the key tools the city uses to measure the health of its citizens: life expectancy.  In 2017, the most recent year for which data is available, life expectancy in New York City was 81.2 years, a one year increase over 2008. Life expectancy in New York City has been above the national average of 78.6 years and is only behind Hawaii and California if compared to other US States.

Figure: Drop in life expectancy in the United States with 1918 pandemic influenza 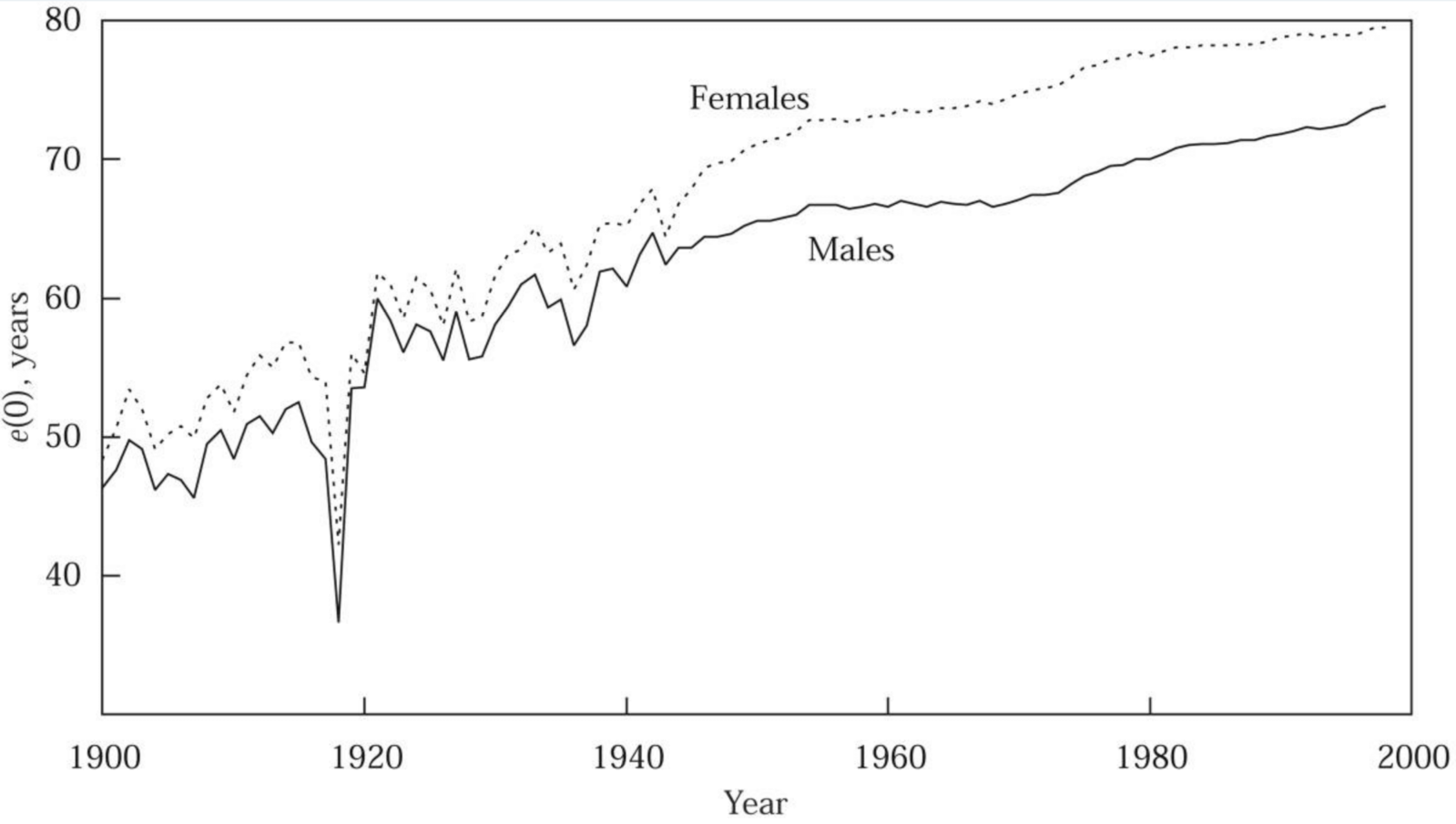 Using data reported by the New York City Health Department through May 14, 2020, we estimated that the excess deaths to date due to COVID-19 caused a drop in life expectancy of 5 years (95% CI: 4.8 – 5.2 years). This should be seen as a preliminary estimate of the potential scale of the impact as there will be more deaths due to COVID-19, our methods were simple and the limited amount of publicly available data required us to make many assumptions. A more methodologically rigorous and complete analysis is needed.

What is life expectancy?

Life expectancy is a measure that is used to summarize the risk of death at different ages in a given population. For instance, life expectancy at birth in the United States is 78.6 years. This means that babies born today would live 78.6 years, on average, given current mortality rates. Since we do not know how mortality rates will change in the future, it says more about the health of the population today and less about how long babies born today will actually live.

Life expectancy at birth is often used as a proxy for the overall health of the population. Changes in life expectancy are closely tracked and rising life expectancies are seen as signs of progress. For instance, in the United States, life expectancy rose from 47 to 76 years from 1900 to 2000, largely due to improvements in public health. Globally, life expectancy ranges widely, from a high of 85 years in Japan and Hong Kong to a low of 54 years in Central African Republic.

Due to a lack of complete data for either current or past deaths, our methods were relatively simple and differ from those New York uses to formally estimate life expectancy on an annual basis. Our goal was not to estimate the exact life expectancy in 2020, but rather to understand the magnitude of the impact of excess deaths to date. Since deaths from COVID-19 will likely continue throughout the rest of 2020, we expect that our work represents an underestimate and the actual difference in life expectancy will be greater.

New York City provides relatively detailed information on COVID-19 cases including the number of cases, hospitalizations and deaths by broad age group, sex race, and borough. They also provide the total number of deaths since March 11th that are neither confirmed nor probable cases.

We used 2017 mortality data, the most recent publicly available data for New York City, to estimate life expectancy without COVID-19. To assess the impact of COVID-19 on life expectancy, we used the COVID and non-COVID death data released daily by New York City covering the period from March 11th–May 14. Confirmed and probable COVID-19 deaths were provided by broad age categories (0–17, 18–44, 45–64, 65–74, 75+). We divided these deaths into the five-year age groups needed for the life table based on the population in each age group (all deaths 18–44 were assumed to take place in 20–44 age groups). Non-COVID-19 deaths were not broken down by age. To determine how many of the non-COVID-19 deaths were excess, we estimated expected deaths using 2017 deaths for March–May and prorated to take into account that the time period did not cover all of March or of May. To assign the excess deaths to groups, we assumed they were not COVID-19 deaths and followed the same general age pattern as deaths in 2017.

We also conducted sensitivity analyses to test the impact of our assumptions.

Excess deaths between March 11 and May 14 are likely to decrease calculated life expectancy at birth in New York City by 5 years (95% CI 4.8 – 5.2). Our methods found a life expectancy of 82.7 years without COVID-19 and 77.7 years when deaths due to COVID-19 and other excess deaths were considered (note that this differs from New York City’s official figures). Sensitivity analyses did not have much impact on our analyses. Even using the recent MMWR excess death findings (5,293 excess deaths compared to 4,052 in our more simple analysis) only increased the difference to 5.2 years from 5 years. 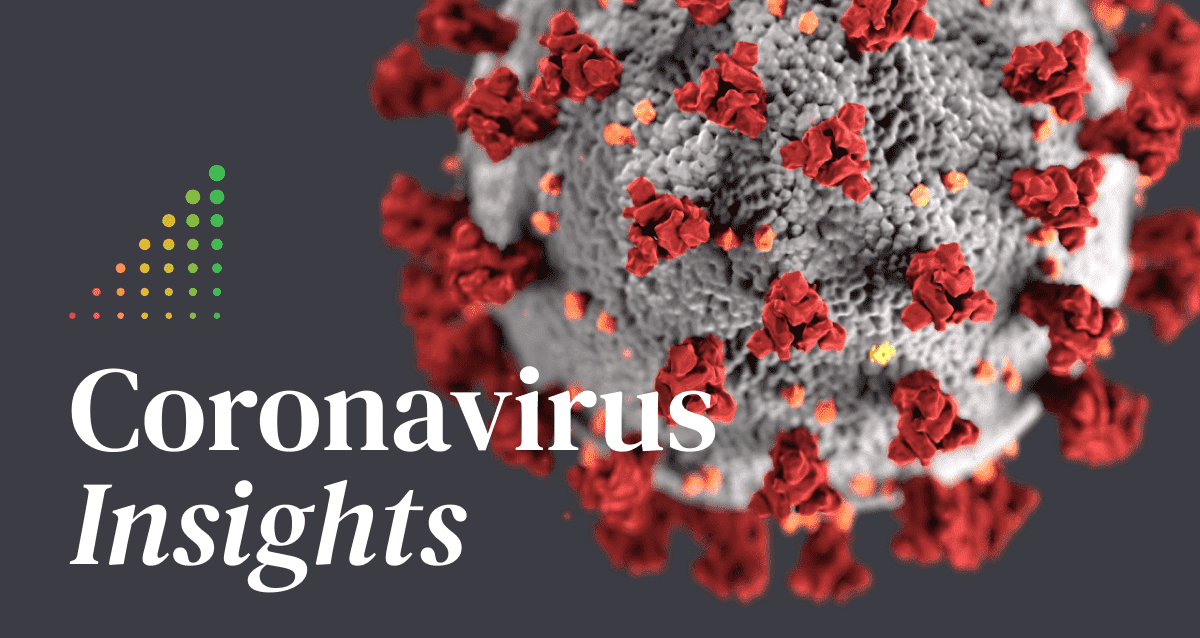 Update on COVID-19 in Africa

Since the first COVID-19 case in Africa was recorded on Feb. 14, 2020 in Egypt, there have been more than 1.1 million reported confirmed cases and more than 26,000 deaths across the continent